Shanghai is less celebrated for its own cuisine, than as a place where all the great cuisines of China meet and merge into one another, creating a kaleidoscopic garden of delights for the gourmet diner. Influenced by Beijing, Yangzhou, Guangdong and Sichuan cuisines, along with foods from Suzhou, Wuxi, Ningbo and Hangzhou, Shanghai is the "melting pot" of Chinese cooking, with a hybrid cuisine that emphasizes fresh flavors and striking contrasts. For this reason, some say Shanghai was doing 'fusion' food long before the term became a popular way to describe innovative cuisine.

This is based on Cantonese food (??,yue cai), and its origins date back to the civil war period of the last century, when there was a large influx of people from Guangdong and Hong Kong into Shanghai. Being wary of the original Shanghai food, which was based on a blend of the type of food eaten in Anhui province and that of Suzhou, Wuxi and Changzhou - where many of the early inhabitants of Shanghai came from - and altogether too oily for their sensitive palates, they brought their own recipes with them. Most popular were the many kinds of delicately flavoured dim sum (??) but, as the materials being used were of local origin, it was only natural that the taste of the dishes changed. The resulting blend, to many a connoisseur, often tasted better than either of the original constituent elements: Fusion cuisine, here we come! 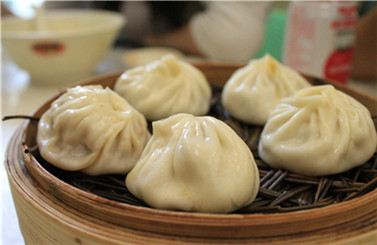 Besides the use of refined flour and pork, Nanxiang Steamed Stuffed Bun has many special ingredients. Water, salt, sugar, soy, sesame and ginger are added to make the stuffing. Even without MSG, shallot or garlic, the buns stay fresh with a delicious flavor. The main pork stuffing is mixed with various seasonal ingredients: bamboo shoot for spring, shrimp for summer and crab for autumn. It's hard to believe that the stuffing is two times larger than the wrap. Miraculous, isn't it?

The prepared buns with translucent thin wraps are as small as water chestnuts. The appealing appearance of the buns may make you feel hungry. However, if you are hasty you will probably be hurt by the hot buns. Here are tips for tasting this snack: bite carefully, sip the soup and dip into special Zhenjiang vinegar. "Wow, yummy!" is then an understandable reaction.

The Hong Kong film Leaving Me Loving You, featuring Hong Kong pop stars Leon Lai and Faye Wong, made this snack known to a wider audience.

Crab-Yellow Pastry
Chinese name: ??? (xiè ké huáng)
This round yellow pastry looks like the shell of a cooked crab, therefore it is named Crab-Yellow Pastry. The main raw material for this snack is oil-mixed dough. The dough is split into small pieces, stuffed and squashed to form a flat round cake. It is then wrapped with a layer of sesame and finally baked in an oven. 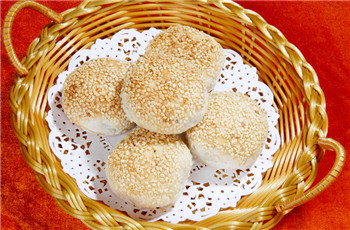 The Crab-Yellow Pastry usually has a salty or sweet flavor. The salty pastries are stuffed with shallot oil, pork, crab or shrimp; the sweet ones with sugar, roses, sweetened bean paste or Chinese date paste.

The prepared pastries are crisp and tasty. As early as the beginning of 20th century, this snack prevailed in Shanghai's teahouses. Today the Crab-Yellow Pastry becomes increasingly popular with Shanghai locals.

Fried Stuffed Bun
Chinese name: ???? (sheng jian mán tou)
Fried Stuffed Bun with nearly 100 years' history is a typical indigenous snack of Shanghai.
The wraps of the buns are made of semi-fermented paste, and the stuffing is made of pork, shallot, ginger, soy, pepper, and sesame oil. The stuffed buns are put in rows in a big pan and fried, being sprayed with water several times during cooking. Finally, sesame and shallot are sprinkled on the buns, and then the wonderful Fried Stuffed Buns are prepared!

With a thin and soft wrap, a golden-colored and crispy bottom, and delicious meat, this snack tastes best when served hot.

Fried Stuffed Buns were first served in many teahouses in old Shanghai. Special fried stuffed bun restaurants began to appear in 1930s. At present, there are hundreds of such restaurants. The stuffing is varied to include chicken, crab and shrimp. 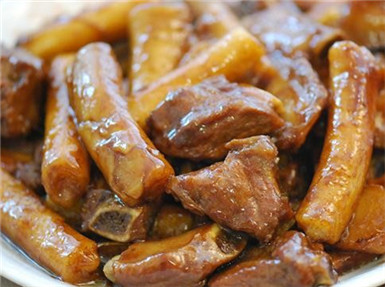 It is a fried snack mainly made of a big pork chop and rice cakes. There are two restaurants that are famous for Chop Rice Cake - Shuguang Restaurant (formerly known as Xiao Chang Zhou) and Xian De Lai Restaurant. The two restaurants have been famous since the 1930s. Chop Rice Cakes offered by them are prepared in completely different ways therefore each has its own unique taste. It is hard to tell which is better. So better to taste both!

Vegetable Stuffed Bun
Chinese name: ???? (sù cai bao zi) As the name suggests, this is without meat but the flavor is not reduced at all. For veggies, these buns, stuffed with greengrocery, mushroom, bamboo shoots and dried bean curd, are a good choice.

Leisha Dumpling
Chinese name: ??? (léi sha yuán) This is a kind of glutinous rice dumpling stuffed with meat, sweetened bean paste, or sesame. Covering with a layer of adzuki bean powder, this snack is tastier and keeps longer.

If you love both Chinese and western food and want various styles of delicacies at the same time, buffet dinner in Shanghai is sure to give you satisfaction. Maybe you are interested in trying typical Chinese hot pot; a large number of restaurants in the city serving different kinds of hot pot will not disappoint you. Missing the western steak and BBQ? Don' worry. The city's steakhouses and barbeque restaurants are excellent.

If you are on a tight timetable, fast food chain restaurants are to be found all over the city. These offer quality food at very reasonable prices. Vegetarian and Muslim restaurants are also available for diners who have special dietary requirements. Tired of common and dull dining experience? Many special restaurants in the city are for you to explore. If you want to have a leisurely afternoon, please do not hesitate to go to the bakeries, confectionaries, cafes and teahouses in the city. You are sure to enjoy yourself to the full!