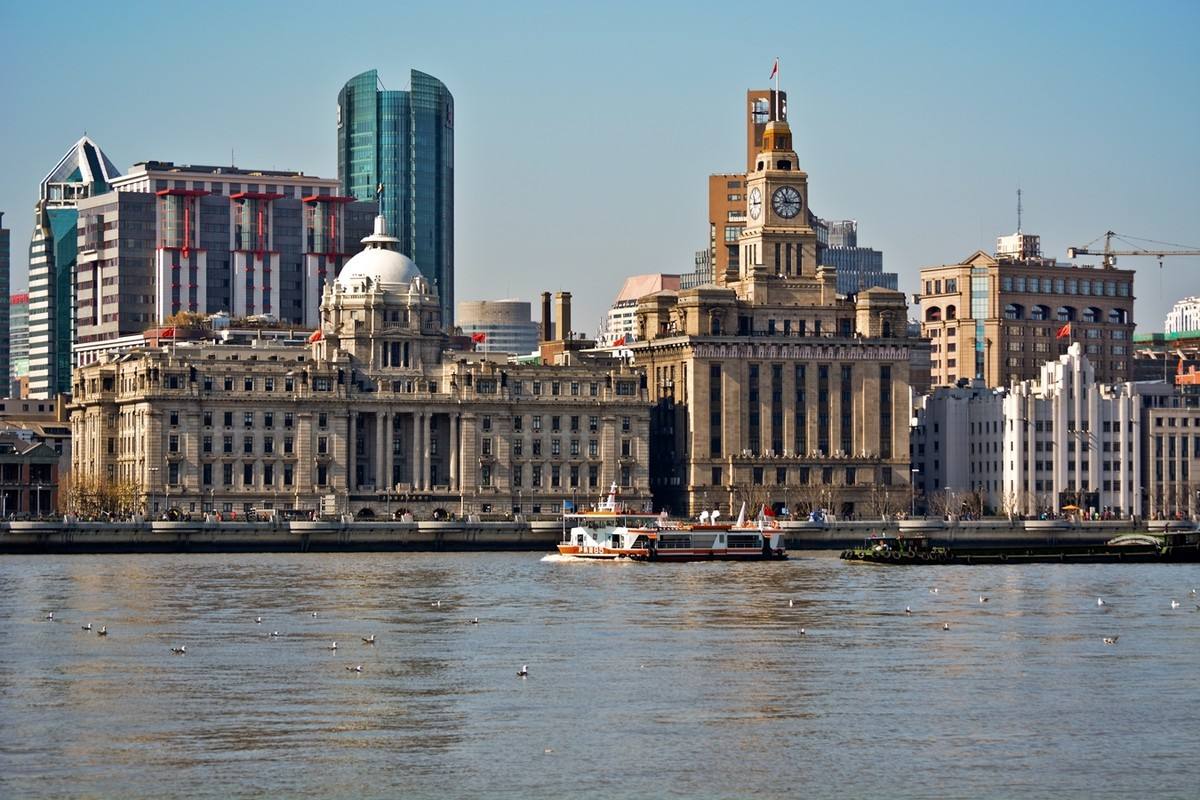 Introduction to The Bund shanghai (Waitan)
The Bund has been a symbol of Shanghai since a hundred years. It begins with the Waibaidu Bridge at the estuary of Suzhou Creek in the north and ends at Jinling Road in the south, with a total length of 1,500m.

The vast Huagpu River and the beautiful new embankment are on the east of the Bund. Here tourists can enjoy the beauty of Shanghai mother river - the Huangpu River - and the new looks of Lujiazui (one of the most prosper part in Shanghai) in Pudong district on the opposite bank. The section extending from the new Bund to Nanpu Bridge is called the Southern Bund, which will be into a new financial and business zone. History&Background
The name "Bund" is derived from an Anglo-Indian term meaning "a muddy embankment," recalling the flood barriers that used to line around it. At the beginning of the nineteenth century, Shanghai was still a small seaside town on the shore of the Huangpu River, and the Bund area was a mere shallow waterfront covered with reeds.

Called Huangpu Road, Yangzi Road and Huangputan Road, the Bund was changed to be Zhongshandongyilu in 1945. In 1843, Shanghai was forced to open, and George Balfour(1809-1894), the first consul of the United Kingdom to Shanghai, took a fancy to the area of the Bund. In 1845, in the name of the so-called” The Shanghai Land Regulations”, the consulate of UK designated an area including the Bund as the Concession of UK. In 1849, the southern part of UK Concession was marked as the Concession of France. But the towering and significant building clusters were thoroughly completed by the end of 1930s. After the large-scale resurfacing and reconstruction in 1992, the bund revitalizes itself and has been selected as the favorite attraction of Shanghai. So someone says: the story of the Bund is the story of Shanghai. This is quite reasonable. Standing by the Peace Hotel (Cathay Hotel), viewing the Jin Mao Tower and Oriental Pearl Tower is another feeling of Shanghai. 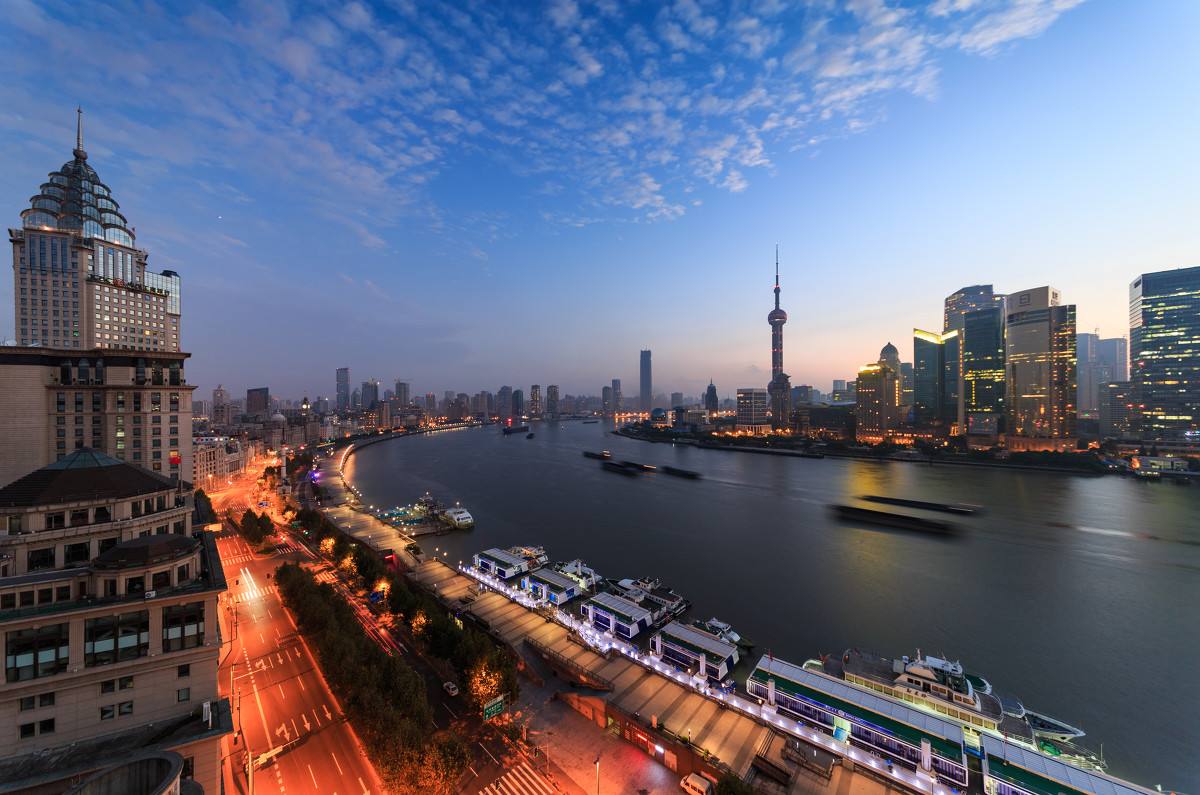 Architectures of the Bund
Located along the Huangpu River, the Bund shows off Shanghai’s outstanding foreign buildings, most of which were erected before 1937. To the Europeans, the Bund was Shanghai’s answer to Wall Street. In the 1930s, the string of buildings hosted the city's financial and commercial centers, and the world's greatest banks and trading empires established a base here.

The Bund houses 52 buildings of various architectural styles, generally Eclecticist, but with some buildings displaying predominently Romanesque Revival, Gothic Revival, Renaissance Revival, Baroque Revival, Neo-Classical or Beaux-Arts styles, and a number in Art Deco style (Shanghai has one of the richest collections of Art Deco architectures in the world).

The great edifices built here held great symbolic importance. When junks and cargo ships reached Shanghai, this promenade along Shanghai's waterfront was the first sight they would see. If any doubted the economic prowess Shanghai enjoyed during those times, the buildings along the Bund quickly disposed of any notions that the city was a pretender. From their windows overlooking the teeming Huangpu, Shanghai's wealthy could watch with baited breath as their cargoes of opium, gold and silver bullion, tea and spices were loaded on and off their ships.

The Astor House Hotel, originally opened in 1846, was the first of Shanghai's international hotels. It's just across the Garden Bridge over Suzhou Creek.

The former British Consulate at No. 33 Zhongshan Lu is one of the earliest Bund buildings, dating from 1847.

The Bank of China Building (1937) combines Chicago and China styles of architecture.

The Peace Hotel (1929) is perhaps the most famous Bund building, Deco all the way; it hosted luminaries from Charlie Chaplin to Noel Coward. Today, you can stay at the renovated Fairmont Peace Hotel for a taste of the '30s.

Bund 18 (1923) is packed with classy retailers like Cartier and Zegna; it also is home to Bar Rouge, a great spot for cocktails with a view.

The Customs House (1925) with its Big Ben-inspired clock tower.

The HSBC Building (1923) is worth stepping inside of for the mosaic zodiac ceiling.

Three on the Bund challenges Bund 18 for the claim to the swankiest tenants and clientele (Jean Georges, Armani, Shanghai Gallery of Art and more).

The Meteorological Signal Tower (1908) houses a collection of old Bund memorabilia and images.

Tour The Bund with Shanghai Private Tour
We will provide a private & spacious car and a local professional tour guide with over 5 years guiding experience only work for you or your group. You will be escorted during your tour. Transport, ticket, and dining (At some local restaurants popular with locals) all we will arrange for you according your requirements. Please check our most popular Shanghai Tours including The Bund as below:

{????}
Are the above sample tour programs not suitable for you? We have more Shanghai tours. Our tours can be tailor-made based on your requirements and budget to create unique Shanghai experiences that allow you to interact with the local people and culture. Our enthusiastic tour expert will promptly reply you in details within 24 hours.