Early beginnings
Sites around Shanghai dating back to the Neolithic Period indicate that the west part of today's Shanghai had become land more than 6,000 years ago and there were people living in the area at that time. Those ancestors first lived by hunting, fishing and grazing and later by farming. 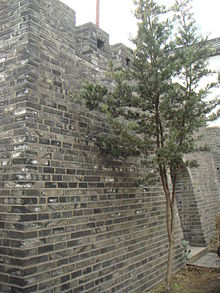 The Dàjìng Gé Pavillion wall,
the only remaining part of the Old City of Shanghai wall.

Up until the 7th century AD, Shanghai itself, then known as Shen or Hu Tu (after local bamboo fishing traps; the character hù still refers to Shànghai to this day, observable on local car number plates), was simply marshland. In fact, most of eastern modern Shanghai didn’t exist until the 17th century, when a complex web of canals was designed to drain the region. The early settlement of Shànghai sprung up at the confluence of the Shanghai River (long since vanished) and the Huangpu River.

Ancient History
During the Warring States Period (475 -221BC), Huang Xie, known as Lord Chunshen of the Chu state, organized people to excavate the Huangpu River. The river therefore has a nickname of 'Chunshen River' and Shanghai has sometimes been referred to as 'Shen' ever since. Fishermen living in the area at that time created a fishing tool called Hu, so it has the other nickname of 'Hu'.

During the Qin Dynasty (221 - 206BC) the city was not even a town. People used boats in the former Mao Lake and the rivers of today's Songjiang District to trade and do business. 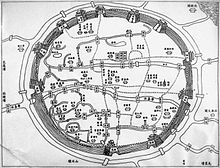 Map of the Old City of Shanghai.

From the Han Dynasty (206BC - 220AD) on the industries of coin-casting, metal-smelting and salt-production grew dynamically in the Shanghai area and the economical connection between this area and the hinterland gradually strengthened. Prosperity continued into the Jin Dynasty (265 - 420).

In the Sui (581 - 618) and the Tang (618 - 907) Dynasties, it enjoyed rather fast progress, as great importance was attached to the economic development of southern China. The area became an important bread basket, thanks to proper reclamation of arable land. After this the area gathered a larger population by degrees and it had more economical and cultural exchange with places at home and abroad.

In 751 during the Tianbao Years of the Tang Dynasty, Huating County was established in today's Songjiang District, the heart of which is now in the Huatinghai area in northeast Huating County. However at that time, Shanghai had not yet developed its position as a major port. During the Tianbao Years, Qinglong County had the busiest port, owing to its advantageous location at the mouth of the Wusong River. Ships departing from its port could sail to other cities along the inland rivers, coastal cities and even Japan and Korea. Later, the silting of the Wusong River made ships desert the port of Qinglong County, giving it a good opportunity for growth.

During the Northern Song Dynasty (960 - 1127), Shanghai, with its excellent port and shipping conditions, gradually replaced Qinglong County as a center of trade. Residential areas formed and the former fishing village became a small town.

In 1267 during the Southern Song Dynasty (1127 - 1279), Shanghai Town was officially established, under the jurisdiction of Huating County. Due to increasing trade, a swarm of merchant ships gathered in the port of Shanghai, making it more and more prosperous.

During the Yuan Dynasty (1271 - 1368) one of the country's seven Maritime Trade Offices was set up in the Town. In 1292 Shanghai County was set up in today's Minhang District. The economy thereafter saw even greater development, especially in the planting of cotton and the textile industry. Advanced cotton-spinning tools and techniques were introduced to promote its industry.

By the Ming Dynasty (1368 - 1644) Shanghai had already grown into the largest cotton spinning base in China. Its textiles were popular at home and abroad. With 'Sha Chuan' (the general name of sea-going junks) as the main conveyance, the shipping industry, another mainstay of the economy of Shanghai, was also well-developed. A great number of shops and restaurants appeared, making Shanghai a busy, well-known busy city.

In 1685 during the Qing Dynasty (1644 - 1911), the Customs Office was established in the city. Consequently unprecedented progress was made in the shipping industry including freshwater carriage, Yangtze River shipping, coastal liners and international shipping. The port of Shanghai came to handle the largest quantities of imported and exported cotton cloth. Many ships berthed in the port, making it the main transfer point of maritime trade. As time passed, Shanghai gained its position as an important economic power, a water transport center and an international trading port in China

Modern History
1842: The British establish a concession by forced treaty with the Qing Dynasty after China loses the first Opium War. Concessions were governed by the occupying country and were untouchable by Chinese law. The French, Americans and Japanese soon followed the British in establishing territories in Shanghai.

1930s:
Shanghai has since become the most important port in Asia and the world's largest trading and banking firms have set up house along the Bund. Tea, silk and porcelain sail to Europe and America and opium comes in to pay for it. Shanghai is the most modern city in Asia - the Astor House Hotel has the first electric light bulb – but also the most licentious as opium dens, whorehouses and the ease of escaping the law abound. No visas or passports are required at the port and Shanghai soon becomes infamous as an exotic port of call. 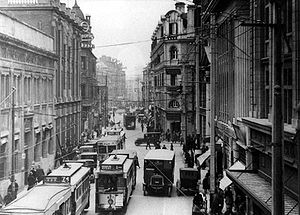 1931-1941:
Shanghai becomes a haven for Jews fleeing Nazi terror. As other countries closed their doors to immigrants in the lead up to the Second World War, over 20,000 Jewish refugees found asylum in Shanghai.

1937:
Japanese bombs hit Shanghai and the foreigners evacuate en masse. Japanese control Shanghai and much of China's eastern coast until their defeat at the hands of the Allied Powers in 1945.

1943:
The Allied governments abandon Shanghai during the War and sign their territories over to Chiang Kai-Shek and the Kuomintang government. The foreign concession era officially ends.

1949:
Most foreigners have left Shanghai and the Chinese Communist state takes control of the city and the formerly privately-held businesses. Industry suffers until 1976 under the Cultural Revolution (1966-76) as hundreds of thousands of Shanghainese locals are sent to work in rural areas throughout China.

Present:
Shanghai is growing into one of the most cosmopolitan cities in Asia with increasingly modern infrastructure and services. It is China's second largest city (after Chongqing) with a population of over 17 million. Dynamic and innovative, Shanghai is helping to drive China's developing economy.

Next: No next link