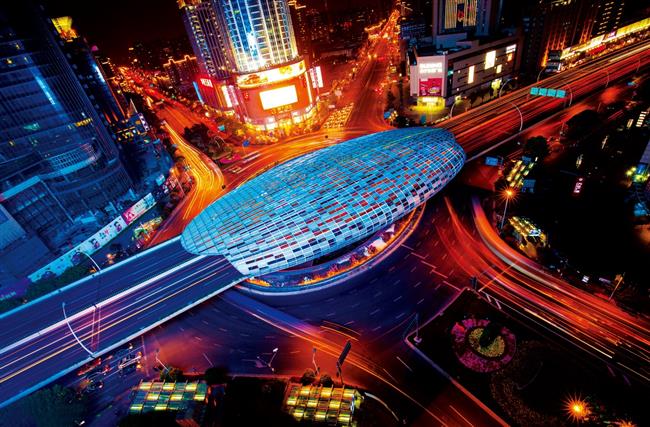 Yangpu has outlined a commercial development plan of its east, west and central areas amid a three-year strategy to turn the district into a hub of innovation in shopping experience.

In line with the blueprint, the development of the west will focus on the popular Wujiaochang (or literally “Pentagon Plaza”) — a cluster of shopping malls and commercial complexes.

The future of the central area, particularly around Kongjiang Road, is earmarked for business with a “Shanghaiflavor.”

In the east, Yangshupu, where the Shanghai International Fashion Center is situated, is planned for more commercial development.

Yangpu is confident it will complete its program after taking 47.47 billion yuan (US$6.92 billion) in retail sales last year, a year-on-year increase of almost 9 percent.

From January through June this year, the overall retail sales of Yangpu District generated 25.54 billion yuan, an 8 percent rise from the same period a year ago.

The Wujiaochang commercial circle attracted more than 300,000 visitors every day. Major retailers here generated 7.34 billion yuan in sales in the first half of the year, up almost 9 percent from a year ago.

Shops along Kongjiang Road reported 412 million yuan of sales during the same period, up nearly 8 percent from last year.

Fashion houses and boutique stores in Binjiang, around the International Fashion Center, rang up nearly 1 billion yuan in sales at the same time, a year-on-year increase of almost 9 percent.

At Wujiaochang, five commercial complexes sit at five cusp tips of the pentagon respectively. Wanda Plaza, Bailian Youyicheng Shopping Mall, Hopson One, Bailian UMAX and the Wujiaochang store of Suning.com have 600,000 square meters of floor space and pushed Wujiaochang into becoming one of the top 10 shopping areas in Shanghai.

The magnificent turn-around of Wujiaochang took place in the early stages of the new millennium. In December 2006, the 335,000-square-meter Wanda Plaza was launched at the intersection of Handan Road and Songhu Road.

A month later, Bailian Youyicheng Shopping Mall was open, which has a total floor space of 126,000 square meters. It was hailed as a landmark shopping mall at the time. The late artist Chen Yifei designed the structure to look like a flying saucer atop Wujiaochang, at one of the busiest intersections in the galaxy. It was given the nickname, the egg, and it became an icon of the pentagon plaza which has broken the cocoon into a butterfly.

In 2016, Hopson One opened its gate at the intersection of Xiangyin Road and Huangxing Road, and became the last one to join the commercial circle.

The 150,000-square-meter shopping complex also features a five-star Hyatt hotel and a top-tier office building, making Wujiaochang a forerunner of the business.

The Daxue Road, or literally College Road, in the vicinity is a lovely narrow street full of cafes, bistros, bookstores and designer shops.

The outdoor tables and chairs vary in texture, size, shape and color to create an endless variety of combinations.

With elegant flowers and green plants, the street is full of vitality and rich in cultural and artistic vibes. The scene is more reminiscent of a thriving European city than that of an Asian street.

Daxue Road has become a gathering place for college students and young makers.

It offers a one-stop solution to shopping, entertainment, eating and drinking as well as commuting from underground.

More than 400 shops will be replaced every year, according to Ren. Last year, YH Super Species opened its first store in Shanghai in Wanda Plaza offering fresh seafood and a cooking service.

The Wujiaochang outlet of Suning.com opened an unstaffed store and Suning Cinema to boost the development of new retail.