A blockbuster film, battle carnage and the memorial that keeps history alive

A wartime memorial along Suzhou Creek has become a new hotspot in Shanghai after the Chinese war epic "The Eight Hundred” hit the big screen in late August.

The blockbuster movie focuses on the Battle of Shanghai and the fierce four-day fighting between Chinese and Japanese forces at Sihang Warehouse in 1937. The film has raked in 2 billion yuan (US$293 million) in box office receipts since its release on August 21.

Despite late summer hot weather, throngs of people come to the warehouse every day to view the bullet-riddled west wall. They take photos. Some leave flowers to honor the dead. 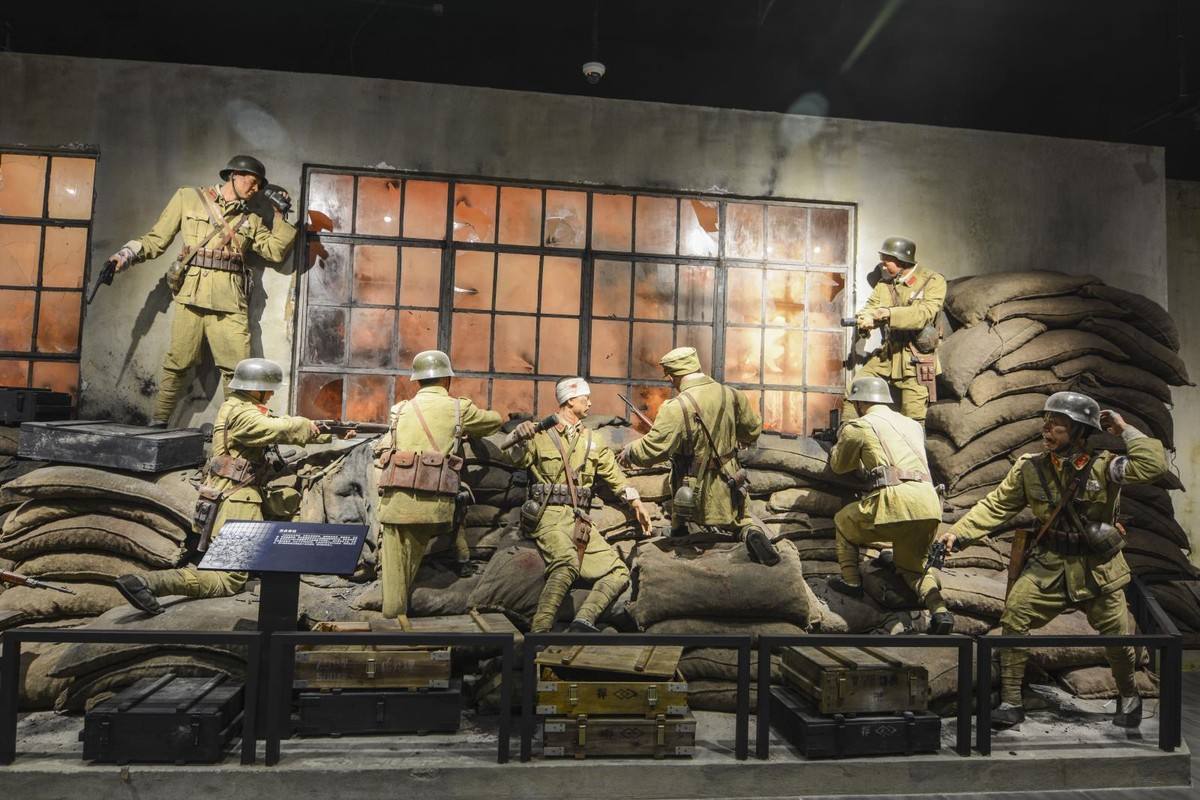 The warehouse itself has been turned into a memorial museum. Online reservations are mandatory. Those who don’t know that find themselves turned away.

“During the summer peak season, we usually receive 1,000 to 2,000 visitors a day,” said Jiang Shanyong, deputy director of the memorial. “But since the movie’s release, the daily number has reached full capacity at 2,500.”

And, he added, “we’re fully booked into September.”

“The movie really got my adrenalin pumping,” Wang said. “As Shanghainese, we all know about the Battle of Shanghai and the defense of the Sihang Warehouse. I’m glad that there’s now a movie recounting that history.”

The father and son brought a bouquet to the site.

“It’s my son’s idea,” Wang said. “He said he wanted to present flowers to honor the heroes. It’s important for him to understand our past and thus cherish our present.”

Zong Xuehao and his friend Qu Ziyu, both aged at 8, said they were very impressed by scenes in the movie showing Chinese soldiers storming across Xizang Road Bridge near the warehouse. The pair walked across the bridge and took pictures before they visited the museum. “It made me feel like I was in history,” Qu said.

Zong said he wants to become a solider when he grows up. “I want to defend my homeland,” he proudly declared.

Ma Youjiong, director of the museum, said it’s good that more people want to visit the site. But what really matters, he said, is to keep history in one’s mind rather than try to swim with the crowd and just take photos of a battle-scarred wall. 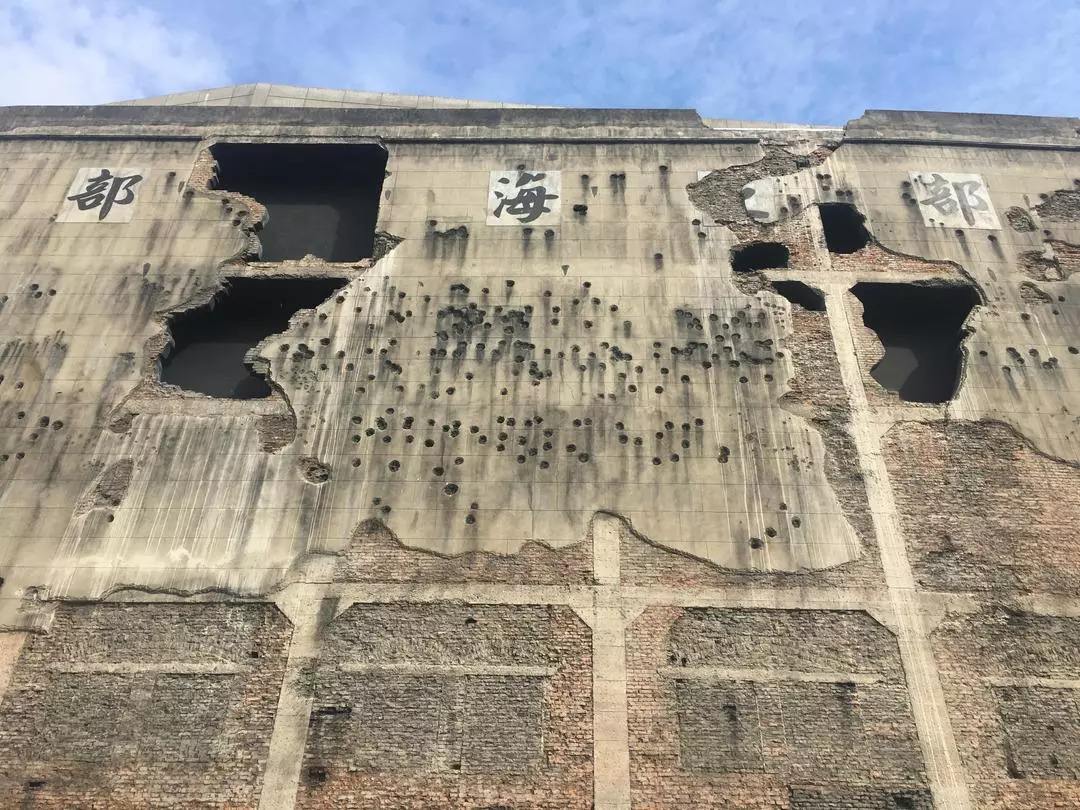 The battle
Sihang Warehouse was built in the early 1930s as a storage facility for four banks.

During the Battle of Shanghai, which lasted three months, it was the last stand for Chinese forces against the Japanese and one of the bloodiest episodes of Shanghai’s wartime history.

On October 26, 1937, Lieutenant Colonel Xie Jinyuan was ordered to lead his battalion of more than 420 officers and men to fall back to the warehouse to buy time for the full retreat of the army and to win international support by showing China’s determination to fight against Japanese invaders.

Xie falsely claimed he had 800 men, seeking to confuse and frighten the enemy. That’s why the defense force came to be called “the 800.”

The warehouse was a natural stronghold. The concrete structure was solidly built and was stocked with sufficient ammunition, water and food. It was also located in a strategic position, very near the international settlement where foreigners lived.

Around the warehouse, Chinese and Japanese soldiers engaged in a fierce four-day battle.

The Chinese resisted more than 10 waves of Japanese attacks, which included the use of poisonous gas and the constant bombardment of the warehouse’s west facade. Chinese forces suffered less than 30 casualties, but they killed or wounded more than 200 enemy soldiers.

The attack started on October 27. The Japanese refrained from using heavy artillery for fear it might threaten the nearby international settlement and bring Britain and the US into the war.

In the wee hours of October 28, a squad of about 40 Japanese soldiers stealthily climbed up to the second floor of the warehouse and entered through a window. The raid was quickly thwarted by the Chinese.

The Japanese launched a second raid at dawn. They managed to sneak into the warehouse, where they tried to blast through a wall and the gate. Chinese soldiers threw hand grenades and fired mortar shells to repel the attack, but faced Japanese soldiers who had covered their assault with two huge steel plates.

Chen Shusheng, a 21-year-old patriot, jumped from a fifth-floor window at the Japanese soldiers and detonated several hand grenades tied on his body. He died for the country but managed to stymie the raid.

During the fight, Lt Col Xie asked his troops to write their wills in anticipation of the sacrifice they faced for the nation. But on the night of October 30, Xie received an order from military command to retreat to the international settlement.

Early in the morning of the next day, the surviving Chinese soldiers crossed the bridge to the safety of barracks on Jiaozhou Road. Xie was assassinated there on April 24, 1941 by traitors bribed by the Japanese. He was 37.

After the Japanese occupied the international settlement in December 1941, the surviving Chinese soldiers were held captive and made to do forced labor. 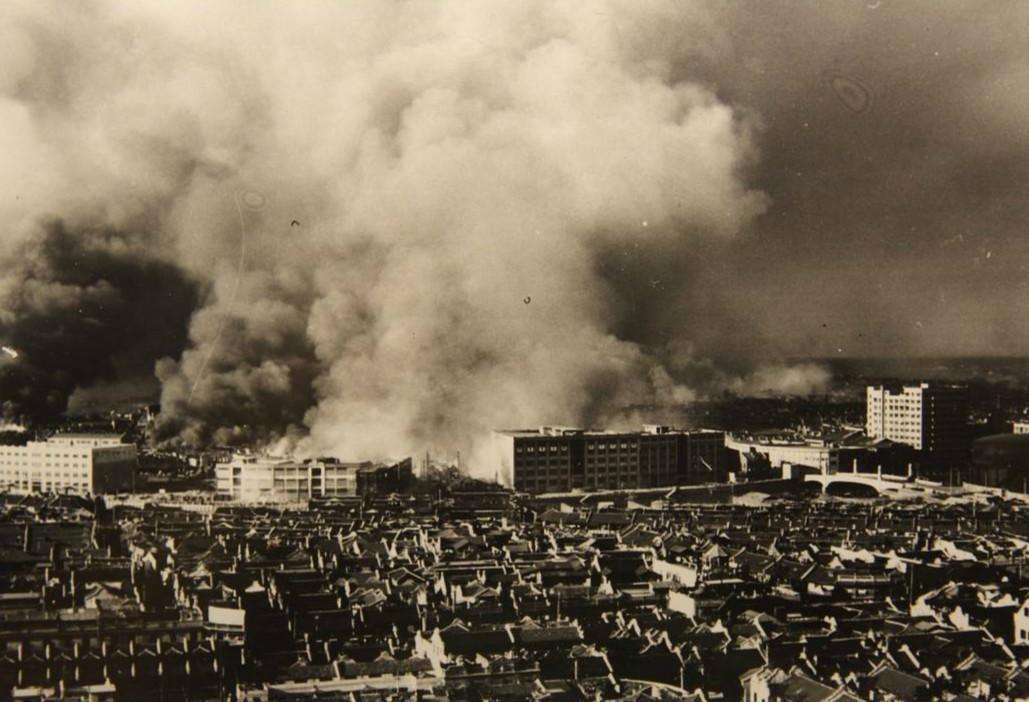 The memorial
For the next 80 years, the warehouse was variously used as offices, a storage facility and a wholesale market. Its appearance greatly changed.

Red bricks bearing bullet holes on the west wall were replaced by black bricks, and the facade was plastered and repainted several times. Two floors were added to the once five-story building.

When authorities decided in 2014 to build a memorial on the site, the warehouse was painted pink and housed a market with more than 200 stalls. Much of its interior had been destroyed, illegal structures had been erected and a tangle of electric wires dangled overhead.

The warehouse was vacated, and restoration work began in October 2014.

Initially, the concept was to repair the building according to original blueprints. But that wouldn’t fully reflect its historic value, especially the four-day fight that left hundreds of bullet holes on the west wall.

“We needed to know what to keep, what to repair and what to stress,” said Wang Haisong, a professor at Fine Arts College of Shanghai University.

Architect Tang Yu'en, who led the renovation, uncovered bullet holes covered by layers of paint. According to old photos and documents, the restoration team located eight bomb holes and more than 420 bullet holes. They also reinforced the wall.

The site displays thousands of archives, including materials donated by the sons of Lt Col Xie and his commander, General Sun Yuanliang. A soldier named Shen Ji also contributed to the collection.

The fight scene is “reenacted” with life-size figures, using 3D holographic projection and audio effects. Visitors can stand among bronze statues of soldiers and listen to Lt Col Xie talking. They can also experience the harrowing sensation of “stout resistance” and “raging flames.”

The memorial periodically holds “interactive plays,” with school children reenacting some of the historical events, such as writing wills to families.

The exhibition ends with a wall inscribed with names of 323 of the 420-plus battalion that fought there. To date, all survivors of the battle have died.

“So far, the memorial has received more than 1.4 million visits,” said director Ma. “It’s popular because it’s built on the historic site and the history is vividly displayed. We will continue to make some adjustments to the exhibitions to bring some freshness to visitors.”

The memorial, at 21 Guangfu Road, is open from 9am to 4:30pm every Tuesday to Sunday. There is no admission, but online reservations are mandatory.

More international brands and eateries have opened at Hongqiao airport to serve increasing demand during the summer travel peak. Due to safety concerns over the Covid-19 virus, Shanghai Private Tour hand-picked some Shanghai City Tours for your reference once you came to Shanghai, where you can feel the bitter history by the second world war happened around Suzhou creek and make sure that you will travel safely during Covid-19.