Introduction
The Jin Mao Tower is an 88-story landmark skyscraper in the Lujiazui area of the Pudong district of Shanghai, People's Republic of China. It contains offices and the Shanghai Grand Hyatt hotel. Until 2007 it was the tallest building in the PRC, the fifth tallest in the world by roof height and the seventh tallest by pinnacle height. Along with the Oriental Pearl Tower, it is part of the Pudong skyline. Its height was surpassed on September 14, 2007 by the Shanghai World Financial Center which is next to the building.The Shanghai Tower, a 128-story building located next to these two buildings and now under construction, will be even taller.

With 88 stories reaching a height of 420.5 meters and 290,000 square meter construction area, Jin Mao Tower, which literally means "Gold Luxuriance Building" in Chinese, is a perfect combination of traditional Chinese architectural style and the world's modern architectural technology.
The first two floors are a capacious and bright lobby. From the third to the 50th floor are spacious offices, which are open-plan (column-free) with a floor-to-floor height of 4 meters and a floor-to-ceiling height of 2.7m. The 51st and 52nd floors are mechanical rooms. The Grand Hyatt Shanghai hotel occupies floors from 53 to 87. It's the world's tallest five-star hotel in terms of distance from the ground, which boasts a 152m barrel-vaulted atrium that is lined with 28 annular well-illuminated corridors and staircases arrayed in a spiral. The 88th floor houses the Skywalk, a 1,520-square-meter indoor observation deck, which is the tallest and biggest one of its kind in the Chinese mainland, It offers a panoramic view of Shanghai and a topside view of the hotel atrium below.The podium building is adjacent to the tower, which is designed as J·LIFE, a center for recreation and fashion.

The tower exterior employs an advanced glass curtain wall, which is crisscrossed by complex latticework cladding to remove the light pollution. Its fire and life systems are different from many other skyscrapers for their design to allow people to rescue themselves rather than waiting for others to come to their rescue. The building is also equipped with an excellent vertical transport system, with features like less than 35-second time for people to wait for an elevator and direct access to the office sections, etc. Its intelligent systems manage all functions and sections, and there is Internet access to every office desk and guest room. All functional equipments and facilities in the building are most advanced, making it a milestone in architectural history.

This building includes modern offices, a deluxe 5-star hotel - the Grand Hyatt Shanghai, exhibition halls, banquet halls, an observation deck, and entertainment facilities which is situated in the following levels: the 1st and 2nd floors form an imposing and bright lobby of the business area; the 3rd to the 50th floors are occupied by office spaces; the 51st and 52nd floors are the mechanical and electrical facilities center, which are restricted for the tower's working staff; the 53rd to 87th floors are reserved for the deluxe Grand Hyatt Hotel of which, the 86th floor houses a club exclusive for the hotel guests and the 87th floor lodges the hotel restaurant; and, the 88th floor-the highest floor, is reserved for the tower's observation deck, which can hold 1000 people at any one time. 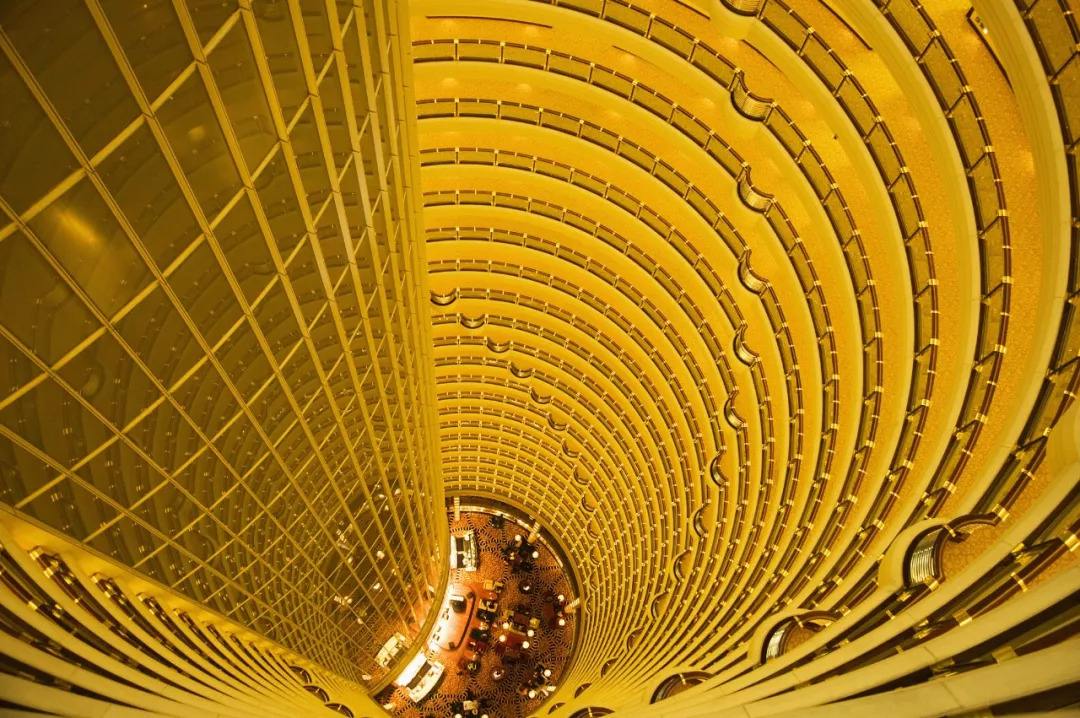 Design of Jinmao Tower
The Jin Mao building was designed by US architectural firm Skidmore Owings & Merrill, and was built by the Shanghai Jian Gong Group, the first Chinese national construction group to tackle such a large and significant project. The Jin Mao Building is a luxurious complex combining office space with commercial space, a shopping mall, and entertainment functions. The three basement levels house electric facilities, service facilities, parking spaces and a food court.

The Jin Mao building is a superb design, combining elements of traditional Chinese architecture and a gothic influence to produce this amazingly modern building. Architects designed the building around the theme of the Chinese pagoda and the number 8(the number 8 is considered extremely lucky by Chinese people): the lowest segment of the building is sixteen stories high and each succeeding segment is 1/8th smaller than its predecessor.
Two elevators with a speed of 9.1 m/sec. work to transport visitors in seconds from the first basement to the sightseeing floor. At this level, visitors have a far-ranged 360 degree view of new Shanghai.

Elevator
The tower has the best elevators available. Two direct elevators operate at the speed of 9.1 meters (nearly 30 feet) per second that can send visitors from the ground floor to the 88th floor for only 45 seconds. There are also five to six elevators every 10 floors, which reduce waiting-time to 35 seconds even during rush hours.

Parking Area
The basement of the tower is a parking area 3 stories deep, which can hold 800 cars and 2000 bicycles. The parking area is equipped with 360-degree surveillance cameras as a security feature of the building.

Shanghai Grand Hyatt
The building's anchor tenant is the five-star, 555-room Shanghai Grand Hyatt hotel which occupies floors 53 to 87. It is one of the highest hotels in the world, second in Shanghai only to its sister property, the Shanghai Park Hyatt, occupying the 79th to 93rd floors of the immediately adjacent Shanghai World Financial Center. These have since been surpassed by the The Ritz-Carlton, Hong Kong, which occupies floors 102 to 118 of the International Commerce Centre. However, the tallest building to be used exclusively as a hotel is the Burj Al Arab in Dubai (excluding the taller Ryugyong Hotel which was never in use). Additionally, the world's longest laundry chute runs down the full length of the tower to the basement, and incorporates buffers to slow down the laundry during its descent.
The Hyatt's famous barrel-vaulted atrium starts at the 56th floor and extends upwards to the 87th. Lined with 28 annular corridors and staircases arrayed in a spiral, it is 27 m in diameter with a clear height of approximately 115 m.It is one of the tallest atriums in the world, the tallest being Burj Al Arab's.

The hotel floors also feature:
53/F: The Piano Bar, a jazz club.
54/F: The hotel lobby and Grand café, served by an express elevator from the tower's ground floor.
55/F: Canton, a high-end Cantonese restaurant that takes up the entire floor.
56/F: On Fifty-Six, a collection of restaurants including The Grill, the Italian Cucina, the Japanese Kobachi, and the Patio Lounge, which is located at the base of the atrium.
57/F: Club Oasis, a fitness club featuring what was once the world's highest swimming pool.
85/F: Highest rooms; this is also a transfer level for the elevators going to the two floors above.
86/F: Club Jin Mao, a Shanghainese restaurant.
87/F: Cloud 9, a sky bar with panoramic view.

Tour Shanghai Jinmao Tower with Shanghai Private Tour
We will provide a private & spacious car and a local professional tour guide with over 5 years guiding experience only work for you or your group. You will be escorted during your tour. Transport, ticket, and dining (At some local restaurants popular with locals) all we will arrange for you according your requirements. Please check our most popular Shanghai Tours including Shanghai Jinmao Tower as below: {????}Are the above sample tour programs not suitable for you? We have more Shanghai tours. Our tours can be tailor-made based on your requirements and budget to create unique Shanghai experiences that allow you to interact with the local people and culture. Our enthusiastic tour expert will promptly reply you in details within 24 hours.