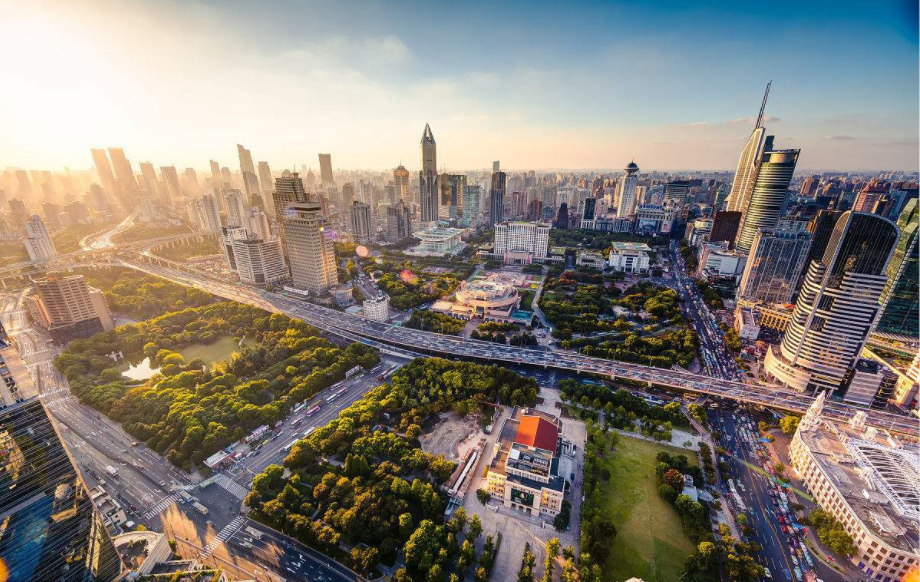 People's Square is a large public square adjacent to Nanjing Road in the Huangpu District of Shanghai, China. People's Square is the site of Shanghai's municipal government headquarter building, and is used as the standard reference point for measurement of distance in the Shanghai municipality. 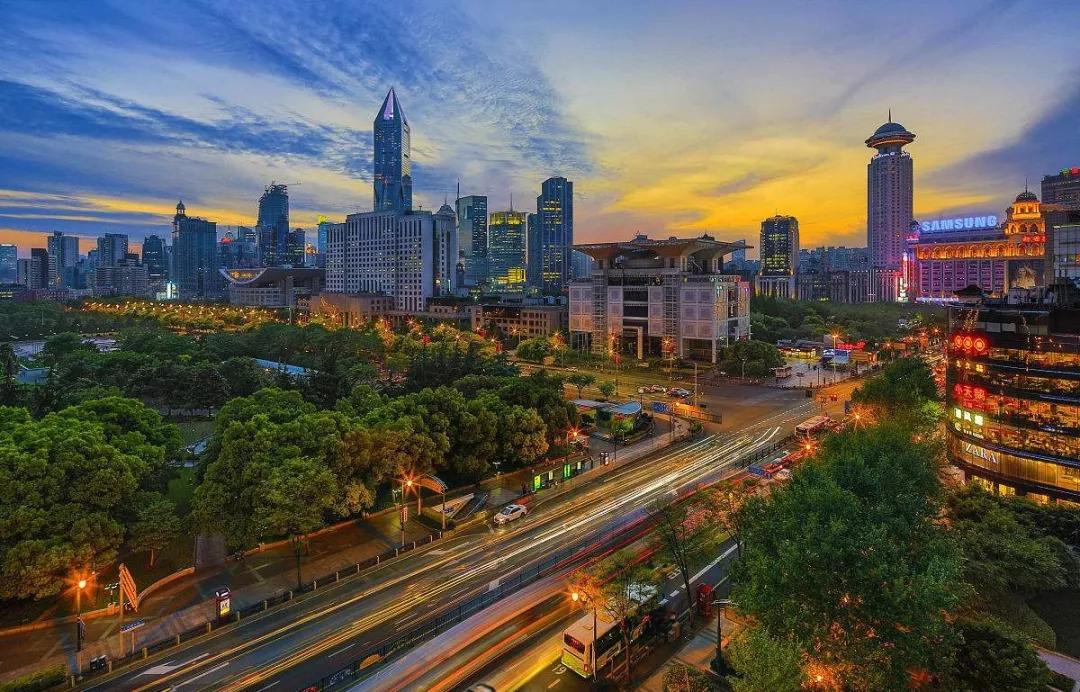 History & Background
During 1930s and 1940s, the present People's Square was once the gambling house and the racecourse, honored as the "No.1 racecourse in Far East". You could visit the ruins of the former main building, which stands the northeast part of People Square. The former Shanghai Library once occupied the former main building of the racecourse.
After the People's Republic of China was founded in 1949, about during the 1950s, the racecourse was rebuilt as the People's Park on the north side and the People's Square on the south part. Great changes have taken place specially in early 1990s. From time to time, People's Square becomes the political and commercial center of the downtown.
In the 1990s, major changes were made to the square. The Shanghai Municipal Government was moved here from the former HSBC Building on the Bund, also the Shanghai Museum was moved here from its previous site in a former office building. More recent additions include the Shanghai Grand Theatre and the Shanghai Urban Planning Exhibition Hall.
Other parts of the race course still remain. The clubhouse buildings became the Shanghai Art Museum, while part of the race track became People's Park, a public park 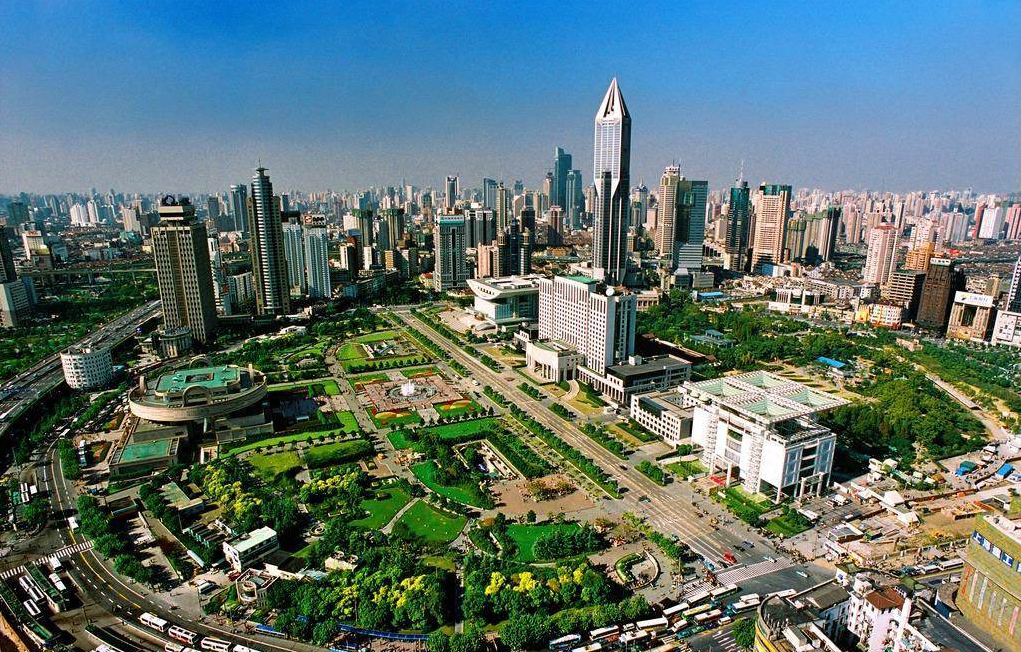 What to see
People's Square, like much of today's Shanghai, is a showcase. Fortunately, it's also home to beautiful maintained gardens and parkscapes, culminating in People's Park, which occupies the northeastern quadrant of this massive tract of land in the middle of Puxi (the west bank of the Huangpu River).

After renovation, the new Municipal Government Mansion lies in the center of the northern People's Square, while the Shanghai Museum, which was designed to resemble a Chinese cooking pot, is located to its south. Flanked on both sides by 17-meter-wide green belts, People's Avenue goes across the center of the square. At the northwest corner sits the Shanghai Grand Theater which is a colossal construction made almost entirely from glass which is balanced by the Urban Planning Exhibition Hall in the east and in the northeast side lies the subway station. Along the south side of the People's Avenue, there are several large underground structures, including Hong Kong Famous Brands Street and Dimei Shopping Center, the largest underground city transformer substation of Asia and the largest underground parking garage of Shanghai.

1?The central plaza, with an area of 3.844 square meters, is located in the south side of the People's Avenue. Two small squares sit on both sides of the central square. The easterly one is Xuri Square (the Rising Sun Square) while the southern one is Mingyue Square (the Light Moon Square). In the center of the central plaza lies the circular musical fountain (320 square meters). The red, yellow and blue glassy sidesteps of the fountain provides a colorful aura which is beautiful and spectacular. The fountain is surrounded by four purple cupreous parterres while the center of the fountain highlights the territory of the city. On each of the four entry steps stand embossments showing traditional culture traits.

2?People's Avenue, a 600 meter long, 32 meter wide pavement, crosses People's Square with a 5.5-meter-wide greenbelt and 6.5-meter-wide non-motor vehicle lanes on both sides of the avenue. The total greenbelt of People's Square is about 80,000 square meters and extends gradually in all directions from the circular fountain.

3?A blue and white dovecot can be seen in the southwest side of the People's Square. Every day visitors will see thousands of doves which provide a peaceful and matronly atmosphere there. Moreover, the square is one of the city's important transportation hubs, so there are loads of jumping-off stops of public traffic routs around it. Visitors can get there easily.

Landmarks beside the People's Square

Tour Shanghai People's Square with Shanghai Private Tour
We will provide a private & spacious car and a local professional tour guide with over 5 years guiding experience only work for you or your group. You will be escorted during your tour. Transport, ticket, and dining (At some local restaurants popular with locals) all we will arrange for you according your requirements. Please check our most popular Shanghai Tours including Shanghai People's Square as below: {????}Are the above sample tour programs not suitable for you? We have more Shanghai tours. Our tours can be tailor-made based on your requirements and budget to create unique Shanghai experiences that allow you to interact with the local people and culture. Our enthusiastic tour expert will promptly reply you in details within 24 hours.