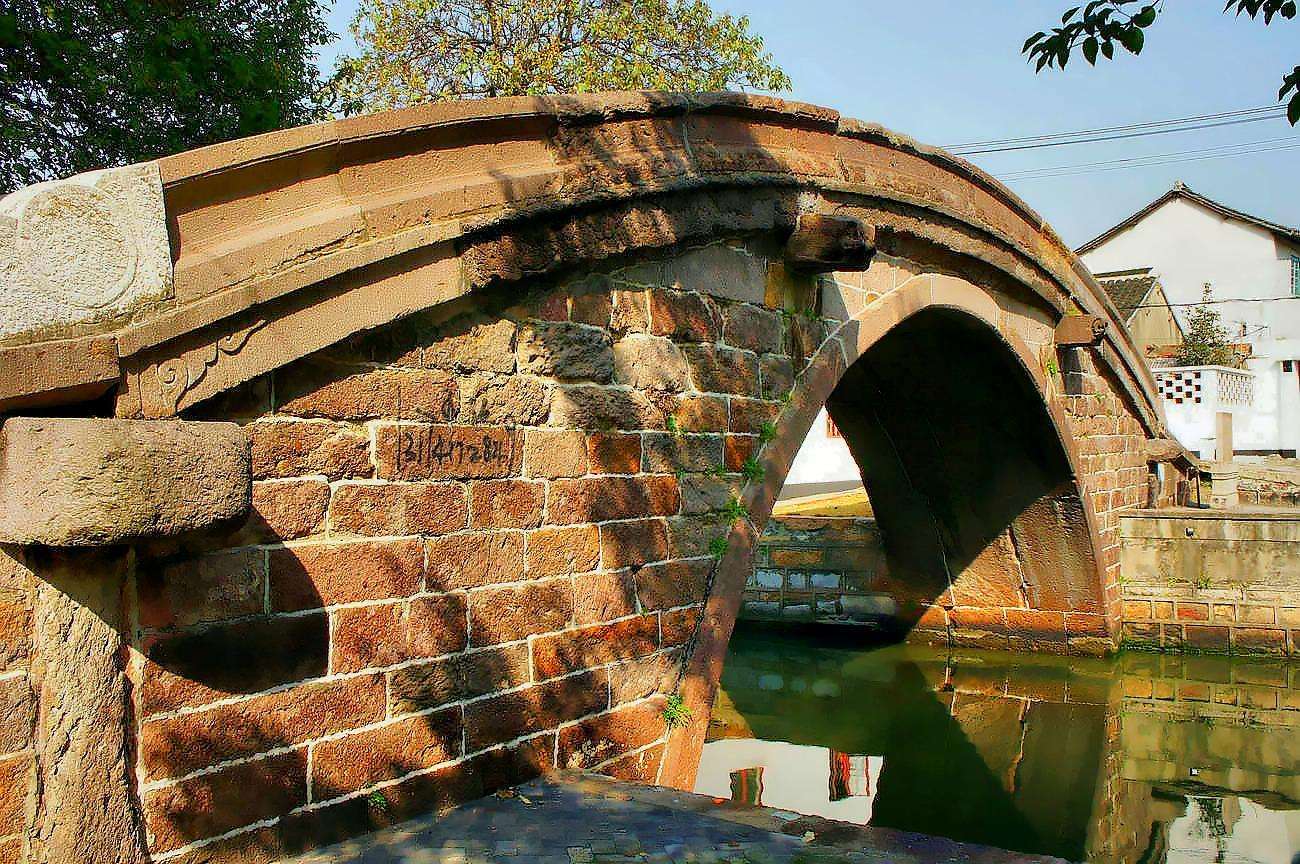 Brief Introdution
Jinze town is subordinate to Qingpu District of Shanghai, with a total area of 108.42 square kilometers. Jinze ancient town is an important transportation hub in Jiangsu, Zhejiang province and Shanghai with convenient water and land transportation. It is rich in resources. It has the largest freshwater lake in Shanghai-Dianshan Lake, and is an important aquatic product supply base in Shanghai.

Jinze ancient town has become the last "Land of idyllic beauty" in Shanghai. Different from other ancient towns in or around Shanghai, there is no business boats in Jinze river. There are only fishing boats, which makes people feel comfortable.

History
The history of Jinze Ancient Town dates back to the Northern Song Dynasty (978 AD). At that time, Jinze town did not belong to Shanghai, but Zhejiang province.

In the Yuan Dynasty (1279 A.D.), after the establishment of Songjiang District in Shanghai, Jinze town was planned to Shanghai. Jinze town was split up and reorganized several times in history.

Until 2004, the new Jinze Town was established and has absolute autonomy, which has continued to this day.

Bridges in Jinze Town
It renowned for its crisscross waterways, but mostly for its bridges, not on the number but for time-honored bridges with different shapes and varied usage, thus it is entitled the "No.1 Bridge Town" of the southern Yangtze area.

Wan'an Bridge
Wan'an bridge is to the north of Jinze Ancient Town, which is the largest stone bridge in Jinze. Wan'an bridge across the city river was built in the Song Dynasty and rebuilt many times in the Ming and Qing Dynasties. The bridge is a single hole stone arch bridge, 29 meters long and 5.5 meters high. The original bridge has Pavilion house, so it is also called pavilion bridge. 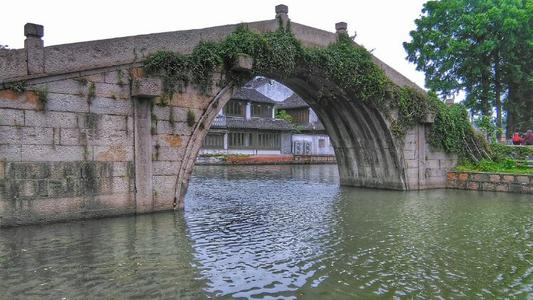 Puji Bridge
More than 300 meters to the south of Wan'an bridge is Puji bridge. Its structure, shape and stone use are very similar to Wan'an bridge. The two bridges cross the same river and face each other from north to south, so they are called “sister bridges”. 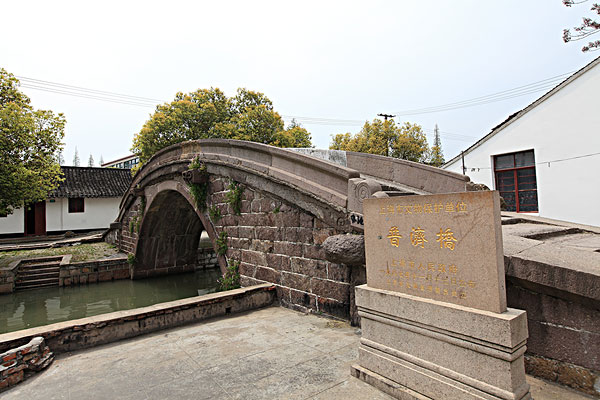 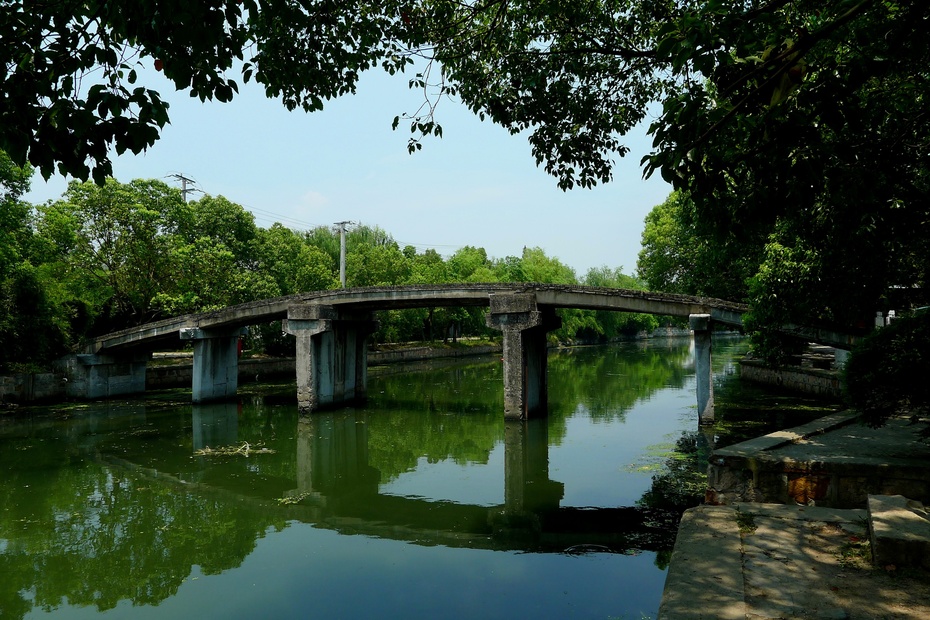 Fangsheng Bridge
Fangsheng Bridge, built in the Ming Dynasty (1368-1644), is beside a monastery and once served as a site for Buddhist disciples to set fish free into the waters. 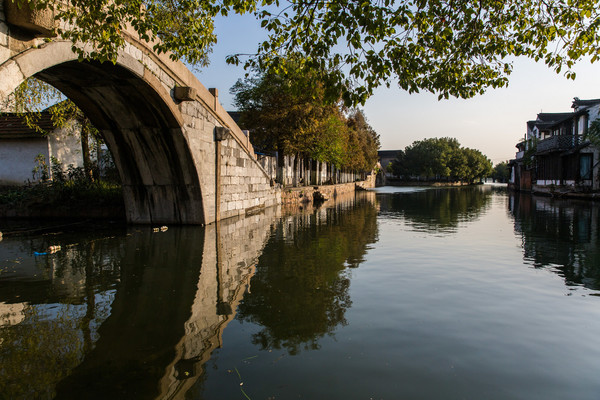 Puqing Bridge
Puqing Bridge, built in 1999, is a reproduction of a famous wooden bridge from the well-known Song Dynasty painting Along the River During the Qingming Festival. The construction, which features interlocking wooden poles to form its arch and elegant body lines, was profiled in a PBS film, China Bridge, in 2000. 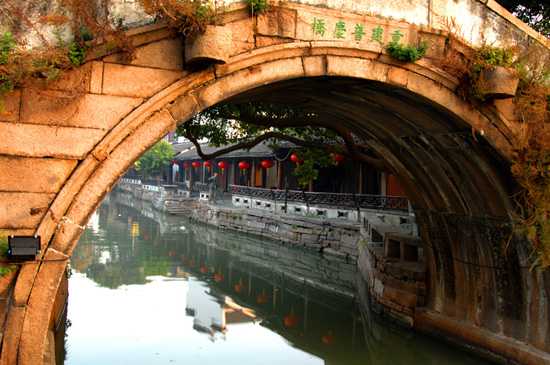 Special Local Food
In addition to a variety of fish, aquatic products. The special snacks of Jinze are also worth mentioning.

Brasenia Schreiber
Brasenia schrenkiana is a single perennial aquatic plant with oval leaves floating on the surface of the water. There is gelatinous transparent mucus on the back of the young stems and leaves. The flowers are dark red, and the leaves can be boiled for soup 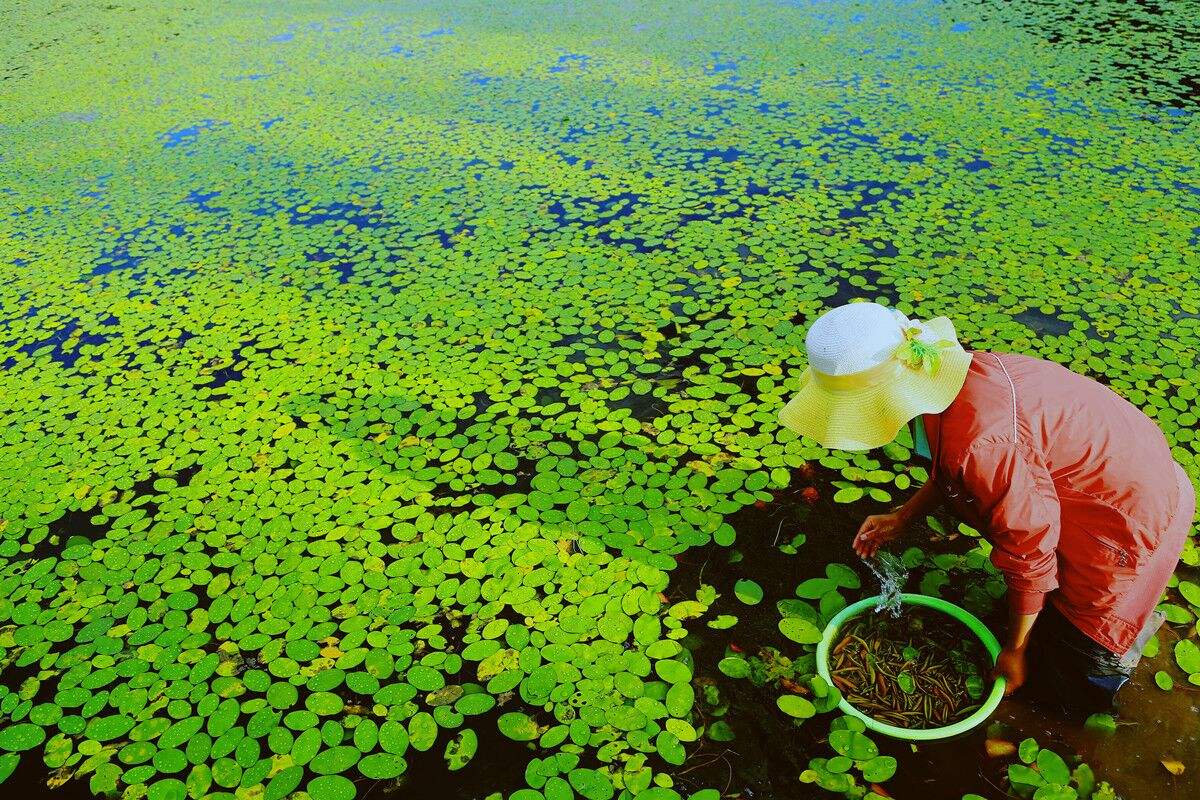 Zhuangyuan Cake
Zhuangyuan cake, one of the traditional Chinese cake snacks, is a famous specialty of Jiaxing, Zhejiang Province. You can find more local Zhuangyuan cake in Jinze ancient town. Although there are differences in production methods and flavors in different regions of China, they all contain the meaning of blessing. 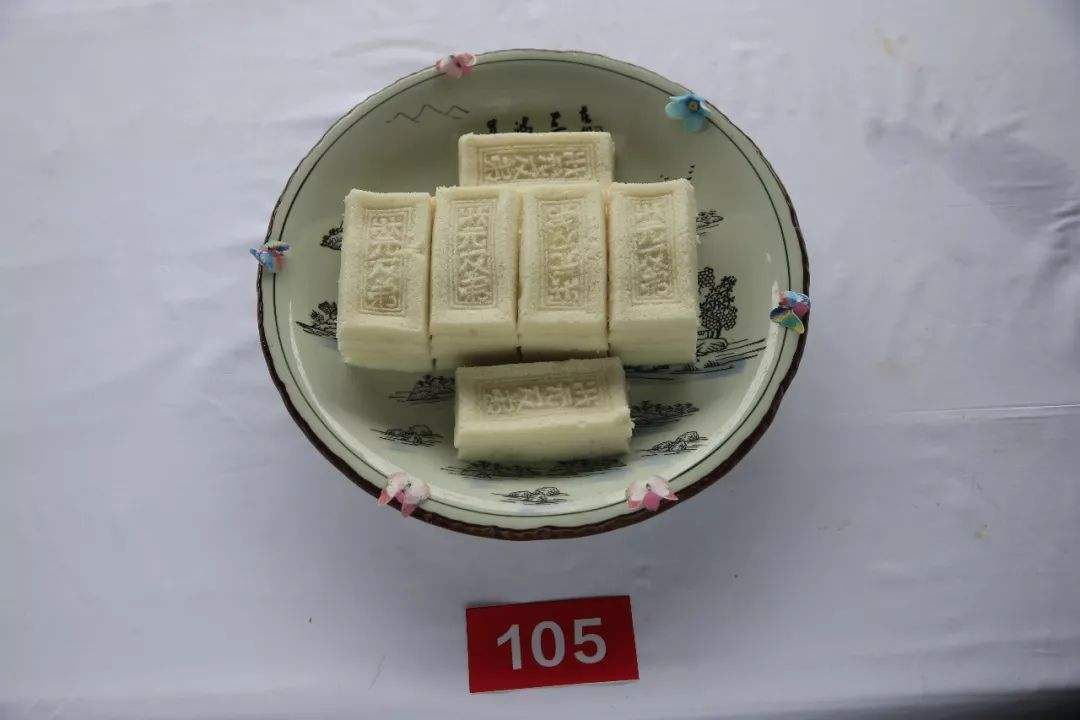 Next: No next link

1. Is the Jinze Ancient town as commercial as other ancient towns around Shangha

Jinze is not a commercialized town like Zhouzhuang, zhujiajiao and Tongli near Shanghai. This is a place where Chinese people seem to be living and working rather than an overdeveloped tourist trap. Here with real houses and real people, not hawkers or souvenir peddlers, with a handful of nice cobblestone lanes and bridges.

2. Is there any public transportation from Shanghai downtown to Jinze Ancient Town? Do you provide private transfer?

You can take public bus from Shanghai downtown to Jinzhe. They don’t have directly bus, you need to transfer on the way. If you want to get rid of hustle of public transportation and troublesome navigation, you can book a private transfer or package tour with us. Feel free to contact us by email.

3. What can I visit in Jinze Water Town?

When you travel to Jinze Water Town, you should visit the bridges here since Jinze is known for its bridges, such as Puji Bridge, Ruyi Bridges, Wangan Bridges,etc. Then, you need to visit Yi Hao Temple,it was originally built in 1260 during South Song Dynasty. Then it suffered from wars and turbulences for many times. By the way, you can also visit local family if you are interested.

4. Can I do a day trip includes Shanghai city highlights and Jinze Town?

It is possible. We can make customized day trip to visit Shanghai city highlight and Jinze Water Town. It takes around 1 hour driving from Shanghai downtown. You can visit the Shanghai Yu Garden and The Bund in the morning, visit Jinze water town in the afternoon. You will have door-to-door service includes hotel pick up & drop off service.

5. Do we need to buy the ticket for Jinze Water Town? When is the Jinze Town Open?

Jinze Town is open all day for tourists, you can walk around the town to enjoy the scenery of water town, the bridges, temples and old lanes. The town is open throughout the day. You can visit here in the early morning and later evening. It’s flexible to come here.

6. Do we need to book a tour in advance to visit Jinze Water Town?

We recommend booking Jinze Ancient Town tours in advance to secure your spot. If you book with our company, you can cancel up to 24 hours before your tour start for a full refund.

7. Which month is the best time to visit Jinze?

There are mainly human landscapes so you can visit Jinze all year round. But spring and autumn are better considering weather. It is not cold in spring and very cool in autumn. However, it is very cold and dry in winter and moist in summer.

8. How long should I stay in Jinze Water Town? What is special there

Actually, half time is enough to visit Jinze Town since it’s a small town around Shanghai. If you reach there, you can explore Chinese traditional town and step back in time to experience China.

9. Is there a train from Shanghai to Jinze Ancient Town?

No, there is no train connect to Jinze since it’s a quiet small town. Jinze Ancient Town is about 15 km from the Oriental Land metro station on Line 17 in Shanghai (which you can also get to Zhujiajiao water town on, getting off at the Zhujiajiao metro station and you take a taxi from the metro station to Jinze Town.

10. I read Jinze Ancient Town from your website, is it difficult to visit there on my own?

It’s not difficult from Shanghai downtown to Jinze, You can take public bus directly from two bus stations, Bus Station of Qingpu District and Zhujiajiao Bus Station. Both of them just need about half an hour. But the town is less development with few English sign. We would recommend book a tour if you want to know the history and culture of the town.