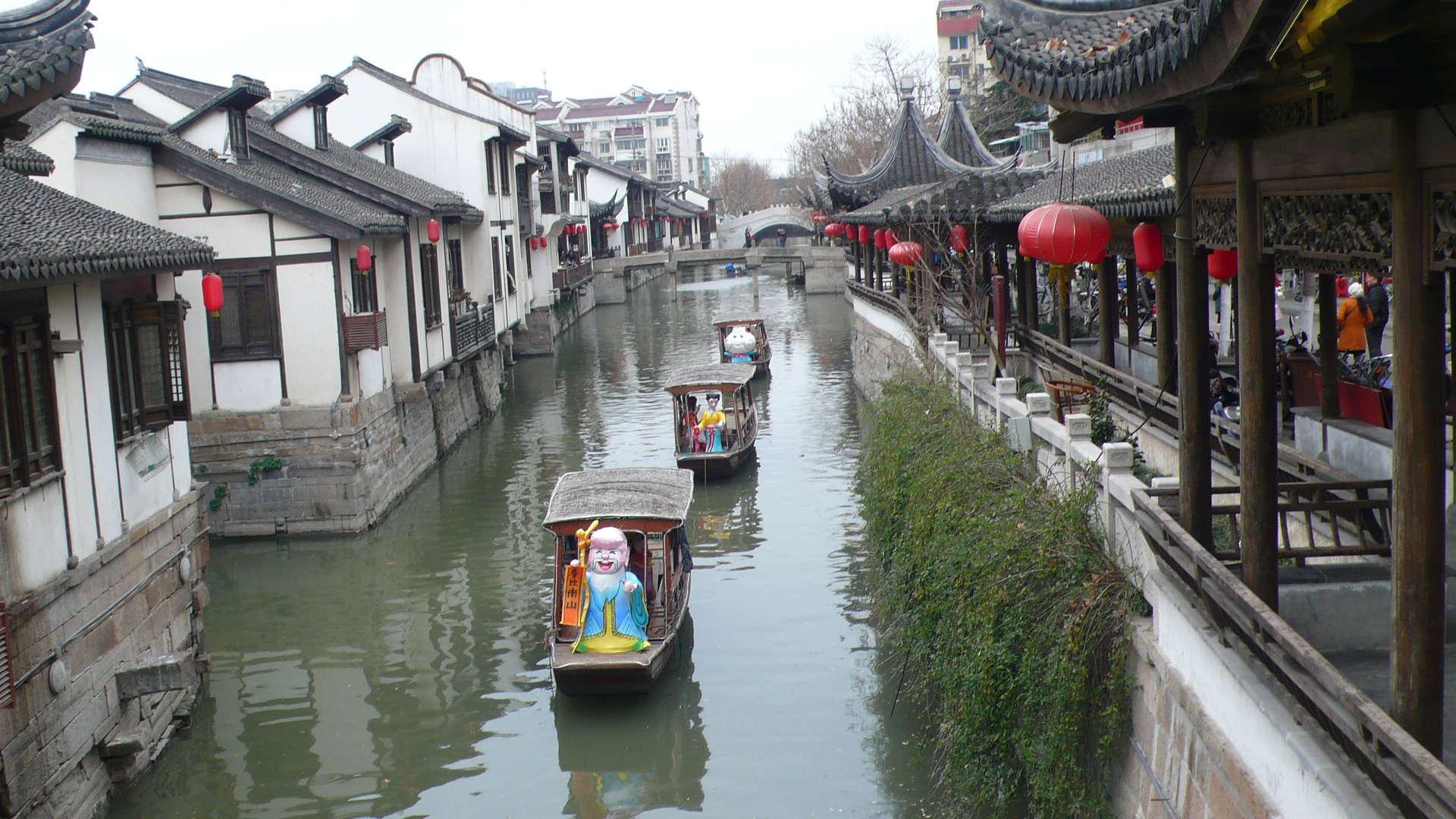 Brief Introduction of Nanxiang Town
Nanxiang Ancient Town is located in the Jiading District, Shanghai. It's a small town but with a great fame since it is the birthplace of famous Shanghai local snack - Xiao Long Bao. Being one of the four most well-known historical and cultural ancient towns in the city of Shanghai, Nanxiang Ancient Town dates back to approximately 1,500 years ago. It is a smaller water town as compared to Wuzhen Water Town. There are boutiques, souvenir shops and eateries lining the narrow streets of Nanxiang Ancient Town. It’s hard to escape the overwhelming scent of oily and spicy Chinese cuisine lingering in the air.


History of Nanxiang Town
In the early Ming Dynasty, Nanxiang Town is the richest town near Shanghai. This town is famous for its weave industry. So, many silk businessmen who were from all over China came here for doing their business. After hundreds years development, the town becomes rich and strong. There are two main markets, the North and the South, in this small and ancient town. The northern one was famous for silk and cloth, while the southern one was famous for rice, horsebean and bamboo.

The lush greenery and the sleepy willows may provide a respite for escaping from the hustle and bustle of the noisy narrow lanes of Nanxiang. Nevertheless, despite the garden’s external and internal features not making it appear it to be as outstanding as one would hope for, it’s the garden’s historical connection to the city that is more to be cherished. There are plenty of relics on display that have stayed untouched since the Ming Dynasty days, and that’s the part that really makes this place sell like hot cakes. 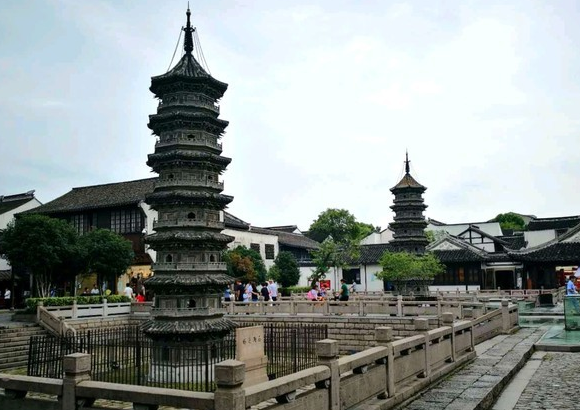 Nanxiang Twin Pagodas
They are the landmark of Nanxiang Ancient Town, were built in the Five Dynasties period (907-960), are the only pair of Buddhist twin pagodas and the only existing brick pagodas in the country. They used belong to a temple. But in 1766 the temple was burned down and all treasures and were gone, except the bricks still left there. In 1990s, based on historical information and documents scientists and skillful workers repaired them.

Nanxiang Old Streets
It is also a great experience to walk around the old street in Nanxiang Ancient Town. This part is somewhat similar to what you may have traveled in other water towns like Zhujiajiao, Wuzhen, Zhouzhuang, etc. and the streets here are full of the rich smell from Chinese cuisine. There are also souvenir shops selling some small things.

Yunxiang Temple
its construction started in the fourth year of Tianjian reign of the Liang of the Southern Dynasty (505). During the Kaicheng reign of the Tang Dynasty, the land area of the temple was expanded to 12 hectares and it had more than 700 monks. A poem by an ancient sings praises of the temple: Nanxiang has a time-honored ritual place, its architecture and pagodas are the best of all. In the 39th year of Emperor Kangxi of the Qing Dynasty (1700), it was renamed Yunxiang Temple because of a horizontal plate inscribed by Emperor Kangxi and became known far and wide. But the time-honored temple was destroyed in a fire later, and the twin pagodas, the stone pillars inscribed with Buddhist scriptures and stone tower, now relocated to the Guyi Garden, were the only remnants.

Guyi Garden
It is one of the oldest gardens in Shanghai and also a well-known Chinese classic garden in the southeast of China. The five main features of Guyi Garden are stretches of bamboo forest, winding brooks, ancient buildings, couplets written on scrolls and artistic pavements.Guyi Garden has all the components of classic Chinese gardens such as the pavilions, the ponds, the twisted brooks and the artistic shaded paths. The garden has all the attributes of gardens of the Ming Dynasty, pretty, delicate, elegant and simple. Some valuable cultural relics such as the stone pillar inscribed with Buddhist scriptures from the Tang Dynasty and the pagoda built in the Song Dynasty are well preserved in the garden 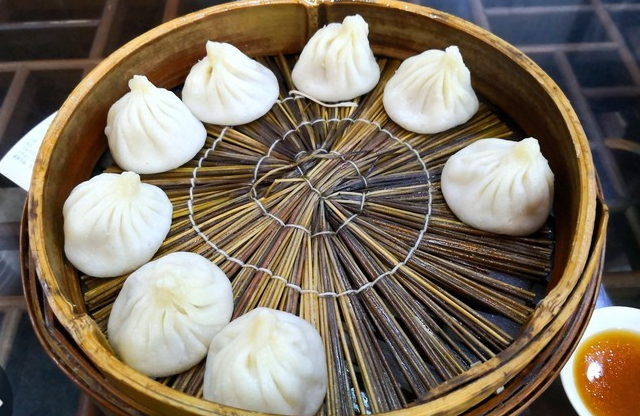 This ancient town is the birthplace of the famous steamed soup buns. Its pastry is paper-thin and gets gathered  up. Then the perfectly seasoned fillings is placed into the pastry and  closed it with a tiny knot at the top. The typical fillings is minced  meat and pork skin. Pork skin needs to be processed before cook. It  is first broiled in chicken soup. Then chill the broth until the broth  turns into jelly state. The jelly is then mixed with the minced meat.  This process is called Guan Tang. After steaming, the jelly inside  the buns melts out and the rich flavored filling soup is formed. If  you just give a big bite then most likely you get messed up or your  mouth burned. The proper way to start the eat is to bite a little on the  top and suck the soup out gently.

1. Shanghai is famous for the Nanxiang steamed Bunds, is something related to Nanxiang Ancient Town?

Nanxiang is located in Jiading District, Shanghai, it's a small town with a history of nearly 1,500 years. It is also the birthplace of local snack Nanxiang Steam Soup Buns. It also called steamed soup dumplings.

2. Is it easy to get to Nanxiang Ancient Town by metro from Shanghai?

3. I will have a short stay at Shanghai Airport, is the day tour to Nanxiang Ancient Town available?

Yes, the tour is available. Make full use of your short layover in Shanghai, take a private tour to visit the 1,500-year-old Nanxiang ancient town, you will visit the famous Old Yiyuan Garden and Liuyun temple depends on the time you have. Taste the local famous soup dumplings as well as other local famed dishes in the town and get a great insight into it culture, custom and history.

The Nanxiang town is famos for Old Guiyi Garden, one of Shanghai's five most important classical gardens, it's a typical in southern China. Walking through the narrow streets at night that affords the opportunity for great picture taking as the water on the canals and the many lit buildings give an almost ethereal backdrop. Nanxiang ancient town is also famous for its many restaurants selling the famous Shanghai soup dumplings known as "Xiaolongbao".

5. Do you have a group tour for Nanxiang Ancient Town from Shanghai?

We don't have Shanghai group tour to Nanxiang Ancient Town but Zhouzhuang Water Town. Since few tourists visit Nanxiang compare to Zhujiajiao and Qibao Water Town. We can customize a private day tour to Nanxiang water town from Shanghai for you. A private tour is more flexible and you will get an in-depth tour experience with a personal tour guide.

6. Where to eat in Nanxiang Water Town? Is there any good restaurant to eat Steamed Buns?

This Ancient Town is the birthplace of Nanxiang Steamed Bun, it's definitely worth trying local delicious buns. However, to make them require high skill. Not all the time you can get authentic steamed soup buns. There is one next to the entrance of Old Yiyuan Garden with authentic and tasty buns.

7. Would you recommend stay one night in Nanxiang town?

If you are tired of bustle life of big city, stay in Nanxiang old town for one night is highly recommend. There are plenty of old streets, beautiful bridges, and the mixture of ancient houses and new houses with the traditional look. Appreciate the tranquil beauty of the ancient town, walk around the narrow lanes, talk with the locals and enjoy the peaceful night view,etc. You'll truly experience the local slow pace life and get relaxed.

8. How much is the entrance fee of Nanxiang Ancient Town? Can I do the boat ride there?

It's free to walk around the town, but if you want to visit the museums and gardens inside town, the entrance ticket is CNY40 in total. And there is no boat ride in Nanxiang Town. If you want to get the canal cruise experience, you can do it in Zhujiajiao, Zhouzhuang or Tongli water town nearby Shanghai.

9. What services are included if I book a Nanxiang Day Tour Package from Shanghai?

The package includes personal tour guide, Shanghai hotel/Shanghai train station pick up & drop-off service, etrance fee, lunch at a local restaurant to taste the famous Nanxiang Steamed Buns. Moreover, this tour is 100% flexible, you can let your guide know your requirements during the tour.