Brief Introduction of Tongli Water Town
One of the six water towns in Jiangnan, with a history of over 1000 years. Tongli is an aged town located a short drive from Suzhou, which is about a hour drive outside of Shanghai. It's a popular water towns in Suzhou, the town is characterized by stone bridges and well preserved ancient architecture including private gardens, temples and houses. True to its reputation, Tongli is a really wonderful travel destination where you can spend a marvelous holiday or experience traditional Chinese culture.

History of Tongli Water Town
The history of Tongli Water Town can be dated back to thousand years ago, it was built during the Song Dynasty. There are hundreds of gardens, temples, mansions and the former residences of celebrities built from 1271 to 1911 during the Ming and Qing dynasties. Amongst the famous gardens are Tuisiyuan, constructed between 1885 and 1887 by an imperial scholar, Chongbentang, and Jiayin Tang garden. Located on the bank of Taihu Lake and east of the ancient Canal, Tongli Water Town is 18 kilometers from Suzhou and 80 kilometers from Shanghai. As one of the six famous water towns, it occupies an area of 33 hectares and surrounded by 5 lakes. 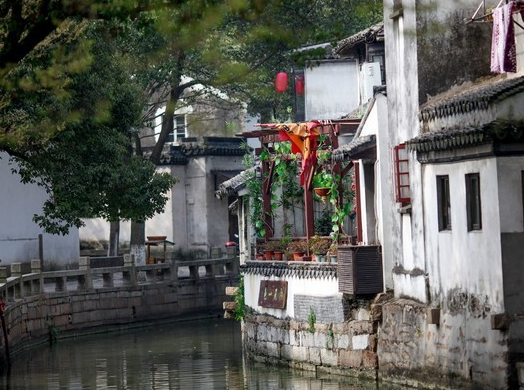 Three Bridges
Tongli is town with many bridges, water alley, boat and lanes. There are more than 49 bridges connecting the ancient town, the Three Bridges are the most speacial among them. Three Bridges refers to Lucky Bridge, Peace & Tranquility Bridge and Lasting Celebration Bridge. Residents believe they are lucky which is why it’s tradition to walk over them on birthdays and weddings. Do not miss the opportunity to shoot these three bridges.

Tuisi Garden
It also known as the Retreat & Reflection Garden, was built in the late Qing Dynasty by a retired official named Ren Lansheng when he retired from political life. It's not a very big garden but it contains all the essence of classical gardens. It is one of the world cultural heritage site outside of Suzhou. It's one of the famous attractions in Tongli since there are many TV dramas are filmed here. It is a good place to relax yourself when you in Tongli Water Town.

Chongben Masion
The masion was built in 1912 by a Suzhou wealthy merchant, this mansion features four courtyards and an interior of wood carvings. Art lines the walls, and many of the scenes depicted are from ancient, Chinese literature. It’s made up of rows of buildings that are each higher than the next to signify hope. It's a ideal place to learn the culture and history.

Pearl Tower
Actually, the Pearl Tower is not a tower but a Garden. It is the largest garden in Tongli Water Town, it mainly describes the romantic story between Fang Qing and Chen Cui'e. Pearl Tower is originated from Tongli in which the main character - Fang Qing seeks financial aid from his aunt, while Cui'e gives him a pearl tower as a gift. The historical fact that Chen Wangdao married his daughter off has been carried on from generation to generation in Tongli. Tourist spots in connection with the Pearl Tower include Chen's Memorial Archway and Former Residence of Chen Wangdao within which there are Chen's Ancestral Hall, Chen's Residence and Chen Cui'e Library.

Jiayintang
It was built in 1922, the Republic of China. It has four advances, and the doors and windows are gracefully carved. Liu Bingnan, the owner of the house, set up an oil mill in Lushui, and then moved to Tongli to build a homestead. The total consumption of silver was 22,000. The same case as Mr. Liu Yazi, a famous patriotic poet.

What to eat in Tongli
Never miss the chance to taste fresh aquatic plants and fish. Most of the food is sweet, the famous snacks include smoked fish, dried bean curd, cakes made of glutinous rice and spring rolls. The famous dish in the Tongli Water Town is called "Sanbai" -- steamed white fish, boiled white shrimp, and whitebait running eggs. Point steamed white fish, whitebait run eggs, leeks soup. It is a famous shop, the time for meals, or a lot of people, people do not stand on the door shouting, there are people looking along the way.

How to get to Tongli Water Town
As Tongli is very close to Suzhou & Shanghai, it about 80KM from Shanghai and 10KM from Suzhou downtown, the transportation is very convenient as the tourism industry develop rapidly. There are several options to visit Tongli Water Town from Suzhou or Shanghai as below:
Suzhou--Tongli: 1) The direct buses are available from Suzhou Railway Station Bus Terminal, Suzhou South Bus Station and Suzhou Wuxian Bus Station, it cost CNY8 and takes around 40 mins; 2) You can take taxi or book a private transfer service, which are more flexible.

Shanghai --Tongli: 1) There are many direct tourist buses from different bus stations in Shanghai, the buses depart from Tourist Center at Shanghai Stadium is highly recommended; 2) Take train to from Shanghai to Suzhou, then transfer to Suzhou public transportation to get to Tongli; 3) Book a private transfer to Tongli water town from your Shanghai downtown hotel directly.

{????}
Are the above sample tour programs not suitable for you? Our tours can be tailor-made based on your requirements and budget to create unique experiences that allow you to interact with the local people and culture. Our enthusiastic tour expert will promptly reply you in details within 24 hours.

1. Is Tongli Water Town Worth to Visit?

If you like a small but graceful water town, Tongli Water Town is the best choice. And there is a direct bus to Tongli water town from Shanghai, which takes about 2 hours. Its renowned for gondola rides, beautiful water, the Tuisi Garden, the Three Bridges Area and the graceful layout. It is one of the six famous ancient towns in south China.

2. Is it rush to do a day tour from Shanghai for both Suzhou city highlights and Tongli water town?

It's fine to visit top Suzhou highlights and one water town from Shanghai in one day and it's not rush at all! If you are interested about this tour, we can arrange it for you. Pickup & drop-off service can be arranged at your Shanghai hotel or Shanghai train station. The tour day normally includes the Lingering Garden, Panmen Gate, Suzhou No.1 Silk Mill and Tongli Water Town. If you have some attractions on your liste, please feel free to let us know, we can tailor made your own trip.

3. Where is Tongli Water Town?

Tongli Water Town belongs to Wujiang City, Jiangsu Province. It is located on the band of Tai Lake and Jinghang Grand Canal, close to the city government. It is adjacent to three famous large cities in South China, namely Shanghai, Suzhou and Hangzhou. It is 80 kilometers away from Shanghai Hongqiao Airport in the east and 18 kilometers away from Suzhou in the north, adjacent to 318 National Highway in the south and Suzhou-Jiaxing Expressway in the west.

4. How to get to Tongli Water Town From Shanghai

?From Passenger Station, Shanghai.There is a bus departing from Passenger Station at Hutai Road, Shanghai to reach Tongli Water Town with no stop. It departs at 1:30 p.m. every day and the journey takes about 2.5 hours.
?From Tourist Center. In Tourist Center near the No.12 Gate of Shanghai Stadium, there is a bus leaving for Tongli Water Town at 8:30 a.m. every day. And the returning bus departs at 4:30 p.m in Tongli.

5. When is the best time to visit Tongli Water Town?

It is suitable for a visit all year round. It is less commercialized and crowded than some other famous water towns. But avoid Chinese public holidays like China National Holiday Day and International Labor Day.

6. How can I get to Tongli from Shanghai? Train or Taxi?

Tongli water town is located in Suzhou city. We suggest you take the high-speed train to Suzhou station first. After arriving in Suzhou, you can choose to take Metro Line 4 to Tongli.

7. Is the Tongli Ancient town as commercial as other ancient towns around Shanghai?

Just like Zhouzhuang, Tongli is one of the most commercialized ancient towns, but its natural scenery is still the most popular, retaining the most primitive buildings and the most simple way of life. You can choose to go to Tongli water town in the afternoon or at night. At this time, the tourists are at least quieter.

8. We are going to visit Tongli by ourselves. Where should we start and what is the schedule of our trip?

9. Hi,we like to visit Tongli, Hanshan Temple, Lingering Garden in one day, is it possible?

If you start your day trip from Suzhou, it’s possible to cram all the attractions you have mentioned on a day trip. Of course, you have to limit your time on each attraction.

10. How to go back from Tongli water town to Tongli metro/subway?

? You exit from the Exit 10 where you can connect the special shuttles going to Tongli water town (Non-stop);
? You exit from Exit 02 where you take the Bus 725 for Tongli ( 4 stops );
? You can also take a taxi from Tongli Subway Station to Tongli Town: 5 km and about 20 yuan.